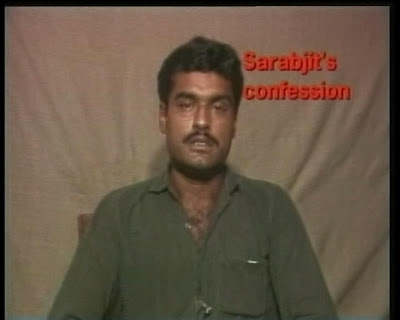 The State terrorist from India, Sarabjit Singh died at a Lahore hospital on Wednesday night. He, though, died of a sudden heart attack but he was brought to hospital after he was brutally attacked by a couple of inmates. It remains a fact that Sarabjit Singh was there in the prison for the last 20 odd years and thus the place had become something like a 2nd home for him. He, whatsoever, remained the ups and downs in the diplomatic and political ties between Pakistan and India, was never attacked by anyone in the last 20 years.
However, soon after Sarabjit was attacked in prison, the Indian government and the Indian media reacted in such a sharp manner as if they were simply waiting for this incident to happen. They reacted to the episode in such a way as if no convicted terrorist, a killer of 14 innocent people was attacked but as if some VVIP from India was very badly treated in Pakistan.
To add spice to the curry, soon after Sarabjit died, the Indian government forwarded a former Indian intelligence officer and an ex-colleague of Sarabjit to media who came with a sensational disclosure that Sarabjit was attacked, following a plan by Pakistan’s superior security agency the Inter Services Intelligence (ISI). The said Indian intelligence veteran, who claimed of being arrested and imprisoned in Pakistan in 70s and 80s, without giving any solid reason as to why would ISI make such a plan just tried to twist the facts that since there is too much security in Pakistani prison, the act could not taken place without a backing of ISI.
This accusation, based merely on personal analysis and presumptions of a former inmate of the same prison, however give added credentials to an Indian media report that claimed that attack on Sarabjit Singh was planned by Indian intelligence agency RAW which it got executed by paying some handsome amount of money to the families of those who attacked Sarabjit in prison.
Here one has to focus on the fact as who has gained from the attack and subsequent death of Sarabjit Singh, a convicted terrorist from India. If one has to blame ISI then it makes no sense as there absolutely seems to be no gain for ISI or the Pakistan government out of such an eventuality. If one blames ISI for Sarabjit attack by saying that Sarabjit was not given enough security there again remains crystal clear that the security of the prison or the prisoners has never been an official concern of the ISI.
Then who wanted this? It goes very clear that those who are today celebrating Sarabjit as a national Hero in India planned the episode. It could have been a nightmare for ISI or for that matter to see Sarabjit being celebrated as India’s national hero after being killed in whatsoever manner. Nobody in Pakistan, including the ISI people would have ever think that India could exploit in such a manner as treating a convicted terrorist as a State hero is against the norms of global community and all the civilized societies on the earth.
Why would ISI plan any stupid thing? But seeing the things from New Delhi and particularly from Lodhi Road of New Delhi, all the ambiguities and doubts evaporate straightaway. Indian government was under immense media bashing and extraordinary humiliation from the opposition with regard to the stand-off with China in Ladakh area. If opposition parties were rubbing hard the government in the parliament over the Ladakh debacle then on the other side the media across India as well as many parts of the world was also hitting hard on the Indian government and Indian army over the same issue.
The Indian Armed Forces, especially the Indian army got completely exposed as paper lions with regard to stand-off in Ladakh. What could have been the best way out to divert every body’s attention from government-army weaknesses that emerged in Ladakh? Yes, as always, the solutions for the Indian in such situations has always been opening up a scene with Pakistan as in India no issue has ever been more important than any issue, involving Pakistan. And without any surprise, the trick worked this time too. All the media attention and the criticism on the Indian army and the Congress government, within minutes of the emergence of Sarbjit Singh episode, shifted from Ladakh to Lahore.
All the Indian TV channels, Indian newspaper and Indian opposition parties shifted their guns from Ladakh to Lahore straightaway. So much so that another high profile issue of the controversial verdict of the Indian Court over the 1984 anti-Sikh riots also went to the backburner. Every TV channel’s top story and every newspaper’s lead story was replaced by Sarabjit issue from Ladakh debacle in Indian media and similarly the Sarabjit episode ended all other debates in Indian parliament.
Keeping in view all these facts, even a school kid could figure out as to who gained and gained well too, out of the Sarabjit episode, India, or Pakistan? The answer is just very clear here now.
Bushra Makhdoom (The Daily Mail)