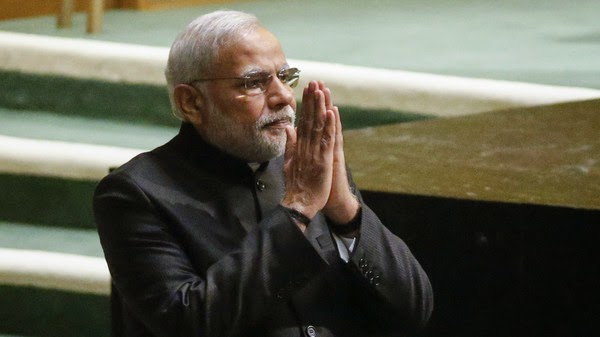 NEW DELHI- Indian Prime Minister Narendra Modi was humbled by the US Secretary of State John Kerry and when Kerry met him a couple of days beck here on his official visit to India that was considered to be an advance visit by a high level US team in connection with the upcoming visit of the US President Barak Obama to India, later this month.
Very credible and authoritative sources at PMO, reveal that John Kerry and his team though started deliberations with Modi and his team in a very polite manner but the heat was generated when Indian side completely refused to admit having any role in TTP-led terrorism in Pakistan. “The atmosphere in the room after Kerry and Modi had lunch together, changed when Premier Modi very blatantly stated that he and his government so shocked to hear about the Peshawar School Terror that the schools and both the houses of the Parliament observed moment of silence to mourn the Peshawar School Terror and thus there could be no Indian hand involved in it,” the sources said. At this occasion, the sources say, American team got furious and showed some hard evidences of Mulla Fazalulla and RAW nexus in Afghanistan to influx terror in Pakistan. The American side took the Indian side quite aggressively and also snubbed Modi over the highly objectionable role of his National Security Advisor Ajit Kumar Doval in the entire dirty game. Modi and his team were grilled over the admissions of Ajit Doval of funding and utilizing TTP terrorists to destabilize Pakistan and Modi was asked to tame Doval and Research and Analysis Wing (RAW) both in this direction. Modi was told to end India’s patronization of Mulla Fazalulla in Afghanistan and it was made it clear to Modi and his team that the US was about to place Mulla Fazalulla on list of global terrorists and an Indian pampering of him would jeopardize the US-India relations and can also have its implications on the upcoming visit of the US President to India.
Sources that the Americans had come with an immense homework and were very easily refuting all the pleas that were being taken by the Indian side. These sources say there was a perception at PMO after Kerry left that the American side had done its homework in the backdrop of Pakistani Army Chief General Raheel Sharif’s recent high profile visit to the United States. It was concluded at Delhi that Pakistani General’s background interviews with the Americans and most likely his handing over of certain solid proof to support his arguments during his US visit had really given enough arsenal to the Americans to come with a very heavy shelling on Modi. These sources also say that it has been conveyed to Delhi that if India desires to have some fruit, other than symbolic benefits and photo shots, out of the upcoming visit to India by the US President, it must bring an abrupt end to RAW-TTP nexus and pull its horses back from the field.
It may be mentioned here the former US Secretary of State, Chuck Hegel had also crystal clearly accused India of exporting terrorism to Pakistan via Afghanistan and his remarks in this regard ar still on official record.
Post Views: 114