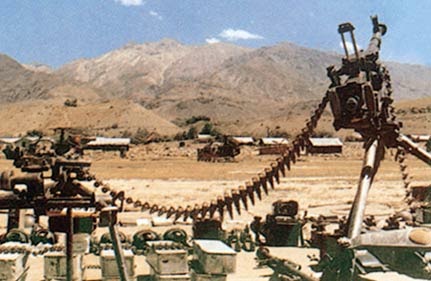 By Makhdoom Babar (Editor-in-Chief The Daily Mail)
In a recent development, an Indian parliamentary contestant in Indian General Elections has stated that it were the Muslim soldiers of Indian Army who contribute the most in India’s military conflict with Pakistan at Kargil in 1999.
Surprisingly enough, despite a never ending series of controversies that emerged across India with regard to absolute Intelligence and Combat debacle on part of Indian army during the Kargil conflict, the Indian media and certain Indian politicians are still trying to portray that the Kargil conflict was Indian Army’s win.

Without realizing that it was India that suffered the maximum loss during the Kargil conflict; without remembering that it was the Indian army that created fake heroes like Grenadier Yoginder Singh and Havildar Sanjay Kumar through fake citations and declared them martyrs while they were later found not only alive but actually with their pants down as disgraced absconders; without recalling that the conflict ending with both the Indian and the Pakistani armies returning to the pre-conflict positions despite Pakistani troops taking control of Indian territories and withdrawing only under international pressure that was mounted to keep the 2 nuclear arch rivals at bay from a nuclear flash point; without recounting that it was India who lost far more money, ammunition and soldiers than Pakistan in the conflict that eventually ended up in a pre-conflict positioning, the pigeonhole Indian media is still calling the Kargil conflict as a victory of Indian army and are getting into a nonsense argument that as to who actually contribute to India’s ” win” at Kargil.

The Daily Mail believes that by highlighting such funny issues and that too in even outrageous manner, like admitting that even after 14/15 years the Indians do not have an idea of as to who actually contributed to India’s “victory” at Kargil is like admitting at the same time that the nation does not know even after one and half decade as to who actually played the main role in India’s debacle at Kargil, from the Indian side.
The Daily Mail is of the firm opinion that by creating such outrageous dramas, the Indians are proving nothing else but that Yes! The ghost of Kargil still haunts them. They need to remember that the victory, they want to credit to their army at Kargil, at first place does not exist at all. It is a victory that was never there at all and the entire world knows it. – See more at: http://dailymailnews.com/2014/04/11/editorial/1.php#sthash.Q7644T3e.dpuf
Post Views: 249

Why did Indians kill 2 Pak Rangers?