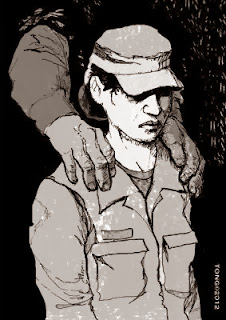 Whisky and Aspirin, Aspirin and Whisky. This was what Indian Defense Minister AK Antony was repeating at his office at New Delhi on 14th May 2013 while he was preparing to address the high profile Conference of the top Commanders of the Indian Navy after a few hours. But addressing the top Navy commanders meeting was not the reason behind his anxiety and high level of mental disturbance that he was suffering from at the very that moment. The actual reason behind all the discomfort and distress of the Indian Defense Minister was a written intelligence report that he was reading right there. The report was about a fresh incident of sexual abuse in the Indian Navy in which the wife of a Navy officer had lodged a formal complaint about her husband forcing her to consume alcohol and also to have sex with his colleagues from the Navy.

This report was not the first of its kind as the Indian defense Minister was really huffing over the past few years by receiving such reports from all the three Armed Forces of India that come under his direct command including the Indian Army, Indian Air Force and Indian Navy, apart from several other military and paramilitary Forces and the Minister found him an acute helpless stage to overcome this unique syndrome that had gripped the Indian Armed Forces very forcefully with no apparent way out.
The Daily Mail’s investigations reveal that the syndrome of sex abuse has crept into the Indian Armed Forces at every level. It remains a fact that the cases of sexual abuses at the lower level seldom come to the limelight while the cases of the similar nature, involving Officers , some how manage to make it to the media, though not every time. These investigations indicate that in most of the cases involving officers of the Armed Forces, the leadership of the Services normally tries to hush up the issues but when the things go too wild, the action is taken, though with a pinch of salt. The Daily Mail’s investigations also indicate that whenever any female officer from any of the three Armed Forces of India lodged any complaint of sex abuse by Seniors or fellow officers, she actually invited acute trouble for herself as never in the history of Indian armed forces, any such complaint by any female officer was entertained on merit and in fact in almost every such case, every complainant female officer was instead punished and removed from the service with Squadron Leader Anjali Gupta of the IAF and Captain Poonam Kaur of the Indian Army being the top examples in this direction.
The Daily mail’s investigations indicate that Major General Lal who was Commander of powerful 3rd Infantry Division of the Indian Army, fell from grace soon after he, during a Yoga ( traditional Indian exercise) asked his junior woman officer to assist him with his fitness regime.
For acts that he committed during that yoga session, which according to the lady officer were sexual in nature, he was Court-Martialed the same year after a Court of Inquiry found him culpable of acts unbecoming of an officer. The charges from the woman officer led to bitter acrimony, with Lal’s family, his wife and daughter, jumping into the fray with counter-charges at a press conference held in Chandigarh, where it was alleged that the complainant’s behaviour too was not officer-like. They claimed that there were negative internal reports about her conduct in the army, prior to her making the sexual harassment allegation.
General Lal’s Court Martial, though, held him guilty of the offence of sexually harassing the woman officer after a year-long proceeding and ordered his dismissal from army service.
With that ended an illustrious career that was so promising that Lal, who was a National Defence College graduate, would have definitely gone on to be promoted as a Lieutenant General at least, getting to command a Corps. But that was not to be and the charge of molesting a woman officer was his undoing.
The Daily Mail’s investigations reveal that the latest such sex crime incident to hit the Indian Armed Forces is the charges by the wife of a Navy Marine Commando, a 26-year-old Lieutenant, that her husband had an extra-marital affair with the wife of his senior officer.
An IIT graduate who is currently preparing for the civil services examination, the woman also alleged that her husband forced her to have sex with his fellow officers. The officer is at present posted at the INS Venduruthy Naval base in Kochi. In the first week of April this year, the woman filed a police case in Kochi against her husband and his fellow officers and their spouses, apart from lodging a complaint with the Naval headquarters on her allegations in early March.
The 25-year-old woman’s allegations, which included wife-swapping, has come as a bolt from the deep blue sea for the Indian Navy, which organizes the Navy Queen beauty pageants for its officers’ better-halves within the Kochi Naval base during the Navy Ball, a coveted social event in the coastal city.
After Defence Minister A K Antony’s intervention in the matter and with the woman meeting him to raise the issue, the Navy wrote to him after an internal inquiry, noting that her allegations had no merit.
However, a couple of weeks back, the Navy began an in-depth probe into her allegations and asked her to depose before a board that is inquiring the matter. But the woman, citing her civil services exam, has refused to appear before the probe panel. The media glare on the woman’s allegations, which the Navy feels is wild, has hugely embarrassed the Indian Armed Forces.
“Yes, such cases being reported by the media do embarrass the Armed Forces. The reaction, however, seems to be disproportionate to the number of cases that happen in the Armed Forces,” says Brigadier (r) S K Chatterji of the Indian Army.
The law and punishment are the same whether sex crime is committed by an officer or a soldier. The only difference is the manner in which such cases are handled. While a soldier is summarily Court-Martialed by his commanding officer, a Commissioned Officer faces a General Court Martial that is convened to try him. If not, there is always the provision of an administrative action that can be invoked under the existing laws to punish a soldier or an officer. Yet, at no point is a sexual crime hushed up, say officers. “If such cases are ignored, it could lead to seriousFrom Page 1

Another dad rapes daughter in India