Close
– Despite fulfilling all wishes of Delhi, fails to get occupied Indian enclaves back
– Crackdown on Muslim activists, reopening cases against ex army officers was to appease India
– Hasina told nation to get over 17000 acres of land back from India but duped every time
– Mamata Banrejee emerges as top opponent for Hasina government from India
From Monjurul Islam 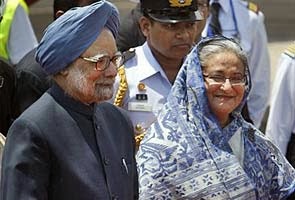 DHAKA – Bangladesh’s Prime Minister Sheikh Hasina Wajid has once again duped the nation when it miserably failed to get Land Boundary Agreement (LBA) with India signed while it promised the nation about the same soon after she took over. The LBA would enable Bangladesh to get back its territorial land that is being illegally and forcibly occupied by India while Hasina Wajid gave a variety of favors to the Indian government soon after taking over as the BD Premier under the garb of getting an LBA signed with India as a result of these favors including going out of the way to address India’s major concerns, specially in the direction of security as well as launching a crackdown on Muslim activists, The Daily Mail has learnt on good authority.
The political analysts here in Bangladesh recall that Hasina Sheikh had promised the nation that it will get the LBA signed with India and will add to the nation’s pride and kept fooling the innocent people of the country over the issue. She first announced that the LBA would be signed during her visit to India in January 2010 but she returned without making any progress over the agreement. She than told her nation that the said agreement would be signed during Indian Prime Minister Manmohan Singh’s Bangladesh visit in September 2011. However, even at this occasion, the Bangladeshi nation was disappointed by their Premier as she once again failed to take up the issue of LBA issue with Manmohan Singh and Singh returned to India without signing LBA.
Now, while she is heading for General Elections, she has once again tried to dupe the nation over the issue by saying she will take up the issue with Indian Premier during her visit to US on the sidelines of General Assembly Sessions.
September 22Prime Minister Manmohan Singh will reassure his Bangladeshi counterpart Sheikh Hasina about India’s commitment to implement the additional protocol to the Land Boundary Agreement (LBA) when the two leaders meet in New York on September 28 on the sidelines of the United Nations General Assembly (UNGA).
Apart from its failure to get the LBA ratified by India, Hasina’s Bangladesh government has also not been able to get any assurance over the signing of the Teesta water sharing accord from New Delhi.
It is said that one of the main obstacle in this direction is the Chief Minister of the Indian state of Bengal, Mamata Banerjee whom Hasina Wajid has failed to impress at all and she has constantly been opposing any such deal with Hasina government.
Political pundits here in Bangladesh take this major failure of Hasina government with regard to ties with India as one of the top setbacks of her foreign policy and also a serious political failure and acute dishonesty with the nation.
Post Views: 252

India launches its version of Fukushima