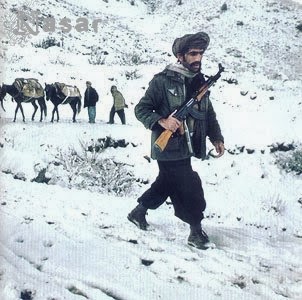 KABUL—The objective of the visit of some renowned Pakistani Pakhtun leaders to Afghan capital apparently was to participate in a national jirga, the agenda of which was to create better understanding among Pakistani and Afghan tribes living on both sides of the Pak-Afghan border.
The jirga was of the view that once such an understanding was created, it could be used to end the on-going civil war and to strengthen the internal security. However, investigations carried out by The Daily Mail have revealed that the real motive behind this meeting was entirely something different, as its agenda has been kept top secret.

It has emerged, after The Daily Mail’s investigations, that all those who take final decisions or are involved in the making of Afghanistan’s national security matters enjoy a sound backing of India. A vast majority of the members of today’s all-important Majlis-e-Nizaar, including Marshal Faheem, Yousas Qanooni, Rangeen Darfar and other noted people, were sitting in New Delhi during the days of foreign occupancy of Afghanistan. In 2004, they also held an important meeting in New Delhi. In that meeting, Mr Rangeen Darfar, who was not Afghan foreign minister but was thought to be an icon as far as Afghanistan’s national security is concerned, was invited as a special guest speaker.
It was Mr Rangeen who helped chalk out a plant at the Delhi meeting. This plan is called the “Darfar Plan” on Afghanistan, the DM investigations have further revealed.
Through the Darfar Plan, the Delhi meeting ‘leader’ Mr Rangeen Darfar urged the Indian leadership to help Kabul post back the alleged Pakistani proxy war launched inside Afghanistan. This, Mr Darfar had told Delhi, should be done at all costs. The Darfar Plan also sought the establishment of the infamous Jablul Siraj spying network, which Mr Darfar ultimately succeeded in setting up.
Under this new anti-Pakistan spying system, a vast network of Indian consulates was to come up along the Pak-Afghan border. The chief objective of these consulates was to woo the angry and anti-Islamabad elements residing in Pakistan’s tribal areas to indulge in terror activities in order to destabilise Pakistan. Later on, young and jobless Baloch youths were also included in the set of designs of the Indian consulates. The youths from Balochistan were given commando training to launch terror activities in Pakistan. The trio of Indian, Afghan and Israeli intelligence agencies of RAW, Khaad and Mosad was adeptly helping these consulates to achieve their purpose. The unending terror activities, started by the elements amply backed and assisted by the aforesaid Indian consulates, are still continuing in Pakistan, especially in its tribal areas.
The Mail investigations further indicate that the fresh joint efforts of the Afghan and Indian establishments are now targeted at Kabul government’s fledgling bid to launch a rapprochement endeavour with the Haqqani group of the Taliban. This new joint venture especially takes care of the erstwhile Afghan leader Mullah Omar. The Haqqani group, it may be noted, is the backbone of Mullah Omar’s strength.
The new Indo-Afghan plan is keenly looking at the US demand for the Kabul leadership to hold meaningful dialogues with the Taliban to secure a lasting peace in Afghanistan, especially for the immediate time period when the United States leaves the country in July 2011. According to The Daily Mail probe, there is another goal the Indo-Afghan nexus wants to achieve: Pakistan should not get any benefits from the proposed US withdrawal.
To achieve the second and important goal, the two establishments (Kabul and Delhi) and their intelligence agencies have chalked out yet another anti-Islamabad plan under which Kabul and Delhi are trying their best to keep the leadership of Pakistan’s Pakhtuns in their hands.
In line with fresh instructions from Kabul and New Delhi, the respective intelligence agencies of the two countries called Pakistan’s Asfandyar Wali, Mehmood Achakzai and Aftab Sherpao to Afghanistan.
The secret agenda behind the Kabul call is, according to the DM probe, to form a new party based on the idea of Pukhtun nationalism. Ostensibly, it seeks to unite Pakistan’s Pakhtuns from Chitral to Bolan. But, according to the probe, the mission of the meeting in Kabul and its follow-up is that the Pakistani Pukhtuns should be given in Kabul’s hands as a bargain chip to be used against Islamabad at any given stage. The DM investigations also see the new Indo-Afghan act as a bid to counter Taliban’s expanding political influence in Afghanistan. It also sees this as an act to keep Pakistani establishment under constant pressure.
But one thing the Afghan and Indian establishments have forgotten is that the type of the Pukhtun leadership they have selected from Pakistan has long lost their appeal, if they had any, in the eyes of the general Pukhtuns. Besides, the Pukhtun nationalism card they might be thinking of using against Islamabad has not only drowned in the River Sindh during the recent floods but also has sunk into the Arabian Sea. And, the late Bacha Khan’s ‘thoughtful’ philosophy is about to be swallowed by a powerful vortex – also of the Arabian Sea!.