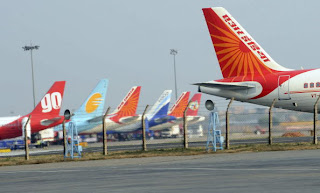 NEW DELHI – AT a time when the entire aviation industry is taking desperate measures to counter the notion of passengers being unsafe in light of the fake pilot license scam, it has come to revealed that one of Air India’s key flight safety executives skipped mandatory safety training.

The report concludes that leaving the training midway points to the executive’s negligent approach
A confidential report, prepared by the national carrier’s vigilance department and accessed by The Daily Mail, reveals that Captain Subodh Nigam, who was recently promoted to the post of Executive Director (flight safety), left the Dangerous Goods Regulation (DGR) training midway in Hyderabad, violating at least six guidelines.
The report categorically states that Nigam, who was General Manager (flight safety) at that time, did not complete the scheduled compulsory simulator training on May 17, 2010. He only attended the pre-lunch session of the DGR training and left for Delhi without completing it.

It alleges that, in the capacity of a senior executive, Nigam forced the instructor to prepone the examination to suit his requirements, in violation of DGCA norms.

The same day, Nigam travelled as an ‘observer’ in the cockpit of Delhi-Hyderabad flight IC 941, but records indicate that no observer was planned for the flight.

The vigilance report concludes that since Nigam has not attended the full DGR training, he “is not fully equipped to deal with subject circumstances for which the training is intended”, or, in plain words, he is not completely equipped to handle flight and passenger safety.

It also concludes that his leaving the training midway points to his negligent approach towards it.
The report accuses Nigam of violating Service Regulation Number 11 of the National Aviation Company of India Limited (NACIL), which states that an employee of the company is liable to serve or undergo training anywhere in or outside India as may be required. It also accuses him of breaching NACIL’s rules of discipline on three counts.

“No rule violations have taken place in Captain Nigam’s case,” said an Air India spokesperson when contacted by The Daily Mail. The Indian Commercial Pilots Association (ICPA) of Air India has, meanwhile, directed all its 650 members to refrain from undertaking any flight, training or checks under Nigam. The release, issued by Captain Rishabh Kapoor, general secretary, ICPA, states, “All pilots are hereby directed to refrain from undertaking any flights /training/checks with Capt. Subodh Nigam as he is a traitor acting against the interests of the pilot community.”